Some people still don’t get my fascination with old people and strange people in general (thank you to the GALS that have accepted me for this! haha). They inspire me cos they ‘live their kooky’ and just go on doing their daily things without a care in the world of what other ppl think (and they’re super cute). Or they’re just plain CRAZY. In the city, they’re everywhere and that just gets me so excited!!

Crazy good drummer man outside a snkr store downtown. He had mad skills playing all sorts of plastic buckets:

Charismatic man in cowboy hat singing and dancing to James Brown in MJ white socks and shoes. Can’t see it here but he was also sporting the white glove:

Lady with the sore leg. I liked her cos the yellow on her bag matches a bit of yellow on the strapping of her pink cap. What a champ – walking stick but still pulling along that trolley:

Crazy man with a boom box strapped to his chest – he’s my hero. Now that’s hardcore: 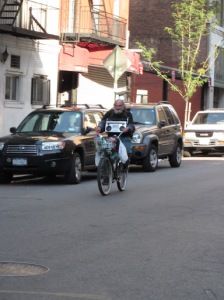 Bag lady in a nice navy blue outfit. I gotta remind you that it was 30+ degree weather: 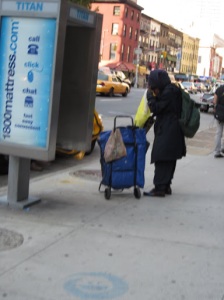 CUTEST old lady of the day. She was midget-sized and sported a mad wig and definitely rocked the all-white look. Though it’d be going a bit too far to try and capture her front-side. So I dare you to use your imaginations: 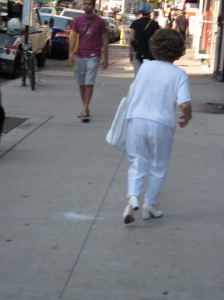 Cute old man slumped against a newspaper box waiting for something. I just liked the contrast in his posture compared to the stability of the box. Woah. That’s deep: 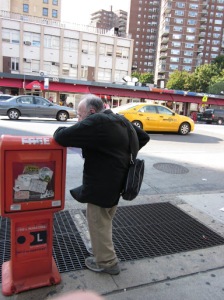 Madly stylish Korean chick in Chelsea. This was taken after we ventured into a Barney’s Co-Op sale where there was a select range of HEAVILY DISCOUNTED DESIGNER CLOTHES AND SHOES (LAD MAC, you woulda loved it). There were sooo many ppl. Was hard to breathe. But the shoes, although a bit dirty, were magical – i dont know the name of the designers but there were really cool pink tie dye platform boots with that stuff garden chairs are made of (rattan?), for the soles. They were based on those shoes rockabilly ppl like to wear (get me?) 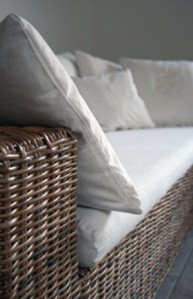 But couldnt fint any that fit my fat flat feet properly. This Korean girl was luckier.
I love how IMPRACTICAL her heeled Doc Martins are and how crazy her patterend shirt dress is ..yet she pulls it off! I want her back pack:

Mehico Sponge Bob. ‘His’ voice was very feminine and whispered into my ear: ” You have a nice face” in a Mexican accent. It was weird. Then just as were leaving thinking that he was a FREELANCE SPONGEBOB, this pushy short little old Mexican woman (his minder) was like “gimme 1 dolla. 1 dolla now!”….she was really aggressive. I was scared that she was gona bite my hand.

Sleepy pa. I have a feeling that this gent was a homeless gent. Nonetheless, everyone NEEDS a good NAP once in a while. Even better when its on a chair in Bryant Park, New York City.

Why did I feel like I fit right in with these ppl?!..COS I’m WEIRD TOO. I shall move to new york city. Problem solved (just kidding mum n dad!).

This was my show of PAIN, FRUSTRATION and ANNOYANCE at the fact that we had walked about 15 blocks from Times Square to Chelsea only to find the beloved EMPIRE DINER shut down until further notice. WHY?????! So we had to settle for the pretty yummy italian joint next door.

NYC. Home of the weird and wonderful.

One thought on “The Kooky and Endearing Characters of NYC”