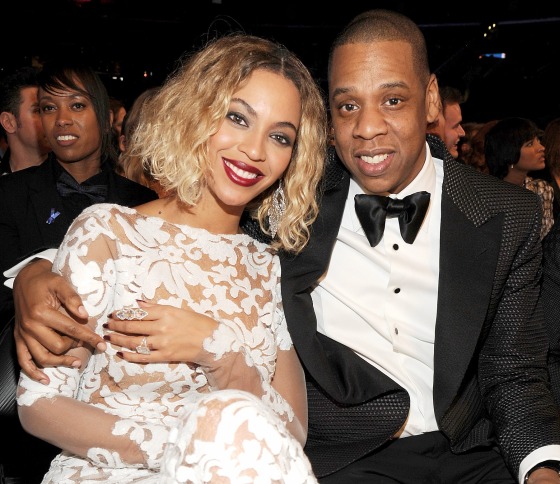 The Grammy Awards are one of my favourites during the awards season. The Grammys have a lot more entertainment value than your Oscars or Globes, without the sloppiness of the entire MTV awards show portfolio. And what the Grammys lack in the hosting talent department it more than makes up through its highly entertaining artist mash-ups.

[Note: If you’re really not that interested in the Grammys geek out that follows, then please proceed to the bottom of this post where some very lively GIFs await]

1. Despite a somewhat lackluster performance of new single ‘Drunk Love’, Bey & J’s opening still proved to us mere mortals that they RUN THIS TOWN and that we’ll never ever be as CRAZY IN LOVE as they are.

2. Watching Lorde’s performance of ‘Royals’was like watching your awkward little sister perform at her big school concert. Even though she looked like she was possessed by a demon (the gargoyle angel video playing behind her sure didn’t help!), there was nothing I wanted more than to see our little  Aussie battler succeed. And succeed she did.

3. Pharrell’s massive mountain ranger hat was a bit of a show stopper in its own right. It’s even sparked a riot on the interwebs with the creation of its own Twitter account, @Pharrell’s Hat. 18,445 followers and counting.

4. The satanic rituals continued with Katy Perry’s ‘Dark Horse’ performance which featured a gothic pegasus, witches broomsticks and black magic potions. So, obviously she’s singing about the literal meaning of a cliché – how groundbreaking (not). Looks like somebody may risk becoming one of the many cliché’s she sings about. Oh, wait..

5. Just when you thought Robin Thicke got to finally break free from his ‘Blurred Lines’ show tune, he goes ahead and sings his ‘Blurred Lines’ show tune. But at least we caught a glimpse of his talent as a legit old school RnB singer, whilst spending ‘Saturday in the Park’ with Chicago. Remember when Thicke was a long-haired, New York City bike messenger singing ‘When I Get You Alone‘?! (Yes, it’s the same guy!)

6. Mr John Legend’s performance of ‘All of Me’ made me feel like he was singing only to me…until a spotlight shone on Mrs Legend and Mr Legend kept sneaking looks at her. Way to ruin a moment, bitch.

7. Tay-Tay basically sung us an episode of How I Met Your Mother (“tell me your past but the future is me”) as she performed ‘All Too Well’. She then proceeded to some awkward, sensual head-banging, as if she wanted the world to know how she makes love…to a piano (akward head-banging at 2:26).

8. Trapeze artist Pink belted out another showstopper in ‘Try’. The fact that her voice was a gazillion times better than that FUN guy’s voice after having just completed a gazillion flips whilst suspended in the air and performing a contemporary dance routine, is a testament to her amazing vocal skills (and how annoying that FUN guy’s nasal-y voice is).

9. Lorde winning back to back awards (one for Best Pop Solo, one for Best Song) made her fellow Aussies oh so proud. You are definitely a ROYAL now. Bet I know what’s going on your next shopping list: Cristal, Maybach, diamonds on your timepiece, jet planes, islands, tigers on a gold leash…and milk.

10. For almost 10 minutes the auditorium was transformed into a church as the Grammy’s played host to a wedding ceremony of more than a dozen couples to be. With Queen Latifah presiding over the ceremony, Macklemore as wedding singer and Madonna as guest of honour, it was a special moment of unity, one perhaps powerful enough to reunite the likes of Chris Brown and Rihanna or maybe even Bieber and the World #samelove

11. Oh, and a couple of French Robots and Thrift Shop Enthusiasts won a bunch of awards too. You can check out the full list of winners here.

As the show drew to a close for another year,  strangely I couldn’t help but think to myself:

I wish Miley was here.

But I guess we’ll have to settle with the G-rated version instead: