About two weeks ago I escaped Sydney’s wild rainy weather and headed south to Wollongong, only to be greeted by a monsoon. But a little bit of water (actually, it was a sh*t load) didn’t stop the 20 artists who stuck by their walls at the annual Wonderwalls festival. Now in its second year, Wonderwalls is a 3-day street art and graffiti festival consisting of art exhibitions, artists talks and multiple large-scale murals painted on the streets of the seaside town.

With a brolli in one hand and a map in the other, we began the treasure hunt through the streets of Wollongong: 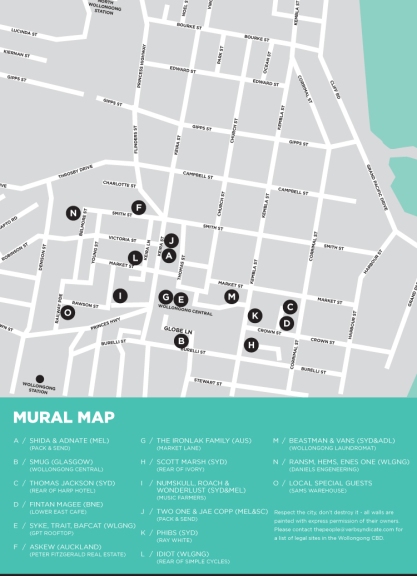 For this collaboration, Melbourne-based artist Wonderlust (pictured below) and Sydney brothers Numskull and Roach stayed true to their love of type, combining their distinct styles into a literal representation of the impermanence of street art – ‘Nothing Lasts Forever’. The brothers form the backbone of the annual event and when asked why Wonderwalls hadn’t launched in the state’s capital responded bluntly saying that the bigger city councils had a tendency to take control away from the artists – gotta love government bureaucracy. 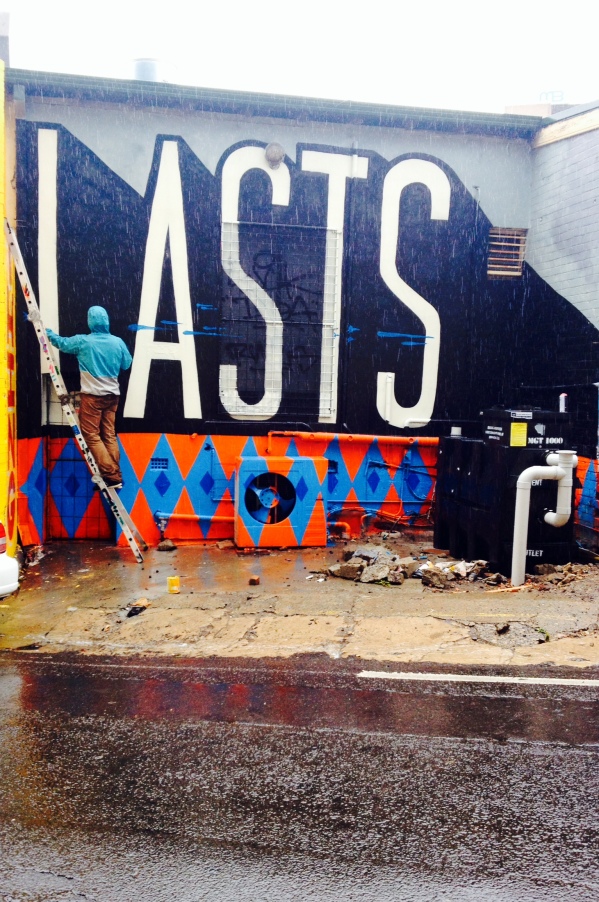 At least the rain was good for one thing:

The Ironlak artist collective, sponsored by local spray paint store AVT Paints, represented old school graffiti, staying true to its tagging roots. Made popular on and in New York trains during the 80s, a “tag” is simply the artists’ personalised signature and often contains subtle and cryptic messages.

Sirum laying down the neon:

Tina of No More Ugly getting down low for the perfect shot with a backdrop wall by Reals:

Carefully juggling his iPhone in one hand and spray can in the other, Melbourne-based artist Adnate (pictured below) reassured us that he was not browsing on his iTunes for the perfect tune to paint to. He was in fact painting off a picture on his phone of his ‘on again off again’ girlfriend whose face is the focal point of the piece. Influenced by Renaissance artists like Caravaggio, Adnate’s classic style makes for an interesting contrast against fellow Melbournian Shida’s futuristic and gestural lines which accentuate the mystical figure. 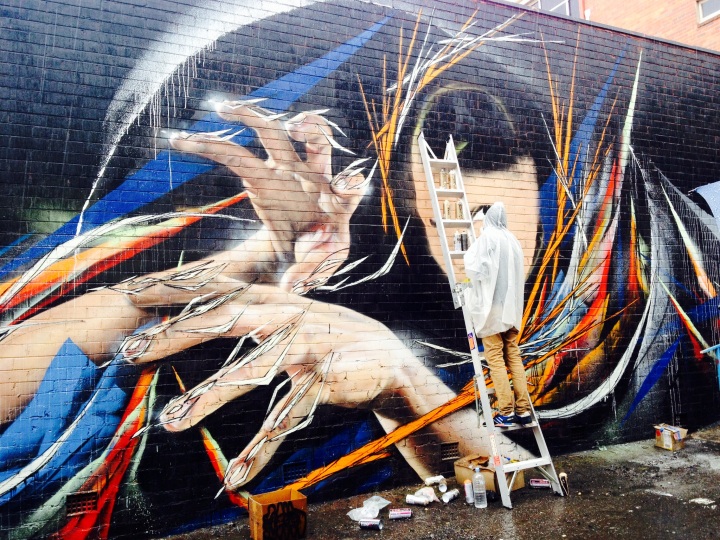 Melbourne’s Two One and Sunshine Coasts’ Jae Copp (pictured below) took a cue from mythology to create a metaphorical exploration of life and death (complete with multi-legged rabbits).

This wall saw Sydney artist Beastman’s distinct tribal-inspired graphic style adorn Adelaide-based Vans the Omega’s graceful female figure. We got word that Beastman had to stall completion of the wall due to the heavy rain (see Beastman’s website for the finished piece).

Passed a wall by one of my fave Sydney artists, Ears, that wasn’t actually part of Wonderwalls but a local council initiative to integrate art into public spaces. Big ups to Wollongong Council!

The final stop belonged to one of the most respected and renowned Australian street artists today, Phibs. Hailing from Sydney, a barefoot Phibs had been going at his solo wall for a while – the rain had failed to deter him from completing his piece. Inspired by nature, multiculturalism and mythology, the beauty of Phibs’ work lies in its intricacy and ability to transport you to another world. And he’s a nice guy too, every bit flattered when I showed him the Phibs canvas bag I sported that day.

As we left Wonderwalls, we took solace knowing that the city’s walls were in good hands.