Fresh from my adventures in the US of A and back into the magical world of full time work, I was inspired, more than ever, to get involved in the arts and culture my city of Sydney had to offer. Plus it would give me something to look forward to when the weekend rolled around.

March was strangely a very hip hop-driven month thanks to the annual Platform Hip Hop Festival at Carriageworks. I went to one of the dance comps last March and had a ball so I was pretty chuffed to see that the event was back and better. My inner gangster could come out and play.

Freak the Technique popping, locking and b-boying competition. There were only a handful of girls battling it out which kinda made me want to give it a go. Was particularly drawn into the music of locking – lots of 70s funk n soul. James Brown eat your heart out. Maybe I’ll get off my ass and go to a class one of these days. 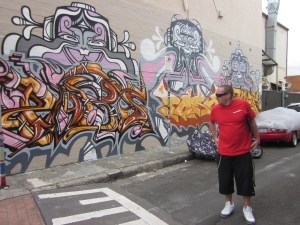 This was one of my favorite events and I absolutely jumped at the chance to attend it. Bought my tix as soon as they were available.
The Street Art Walking Tour.
Sydney isn’t exactly known for its street art (i.e. graffiti) but its like the little underdog of the scene, doing its own thing and doing it well.
The tour was led by a veteran of the Aussie hip hop scene –
Matthew Peet aka MISTERY aka MR E.
Pretty cool guy. Grew up in the inner western suburbs of Sydney (Marrickville to be more precise). Has lived and breathed b-boying, tagging and MC-ing for more

than 20 yrs now and is now one of Australia’s leading graff artists i.e. he gets paid for what he loves to do. So this guy knew his stuff.

He took us around the back streets of Newtown – Wilson st & Wilford Lane – to name a few. And gave us a brief history on street art, particularly graff art. Some interesting things I learned:

– The walls surrounding the train lines that once housed some of Sydney’s most renowned graff art were painted over in brown paint, or “brown-washed”, as part of a clean up of Sydney streets prior to the start of the 2000 Olympics.

– Back in the 80s/early 90s graffiti was all about marking gangland territory. There were a handful of Sydney gangs, some violent some not. But a lot of the time if someone tagged over your tag, it basically meant they were out to get you. As in, bust a cap in you or slice you up.

– Although most graff art out there is illegal, there are a small number of commissioned art. Shop owners can approach an artist to spruce up their side wall for a small fee. A lot of the time graff artists themselves approach shop owners with more prominent shopfronts to ask for their permission to do up their walls, out of courtesy. Who said all graffiti artists were menaces to society eh?

So this was an interesting one. Doom, as he is more widely called, is this reputed “underground” rapper from NYC. He’s originally from the UK but moved to the greatest city on earth when he was a wee tot. What makes him an intriguing MC in the hip hop scene is the fact that his rhymes flow like an ice-block melting in a little kid’s hand on a hot summer’s day. I say little kid because that’s precisely how I think he writes his lyrics. He raps a lot about beer, ho’s and his favourite super-villain Doctor Doom, the masked persona he assumes. Oh yeh, so did I mention that he never
performs without his metal mask? Like never ever.

The set was ok. I think you have to be an absolute die hard groupie fan to have fully immersed yourself in the music. Because after the first couple of beats, including HOE CAKES (my fave track), I was thinking more about the ache in my neck and Doom’s oversized belly than his performance.

Someone once told me that the big conspiracy behind Doom was that it isn’t always the real guy rapping behind the mask – just a phony. Well, if the myth is in fact true, I wonder if they’d hire a 20-something AZN girl accountant for their next gig?